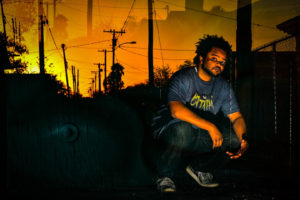 R O Q Y    T Y R A I D
While most artists prefer to repeat the same formula ad nauseam, our own New Millennium Man , otherwise known as RoQ’y TyRaiD (prn. Rocky Tirade) strives to advance himself in as many creative ways as possible while adhering to the quality-code of “dope beats / dope rhymes”. Whether he’s effortlessly racing through aggressive beats, with the intensity of his execution only matched by the seemingly intrinsic ability to flow in and round each pocket; playfully expressing himself over light-hearted, soulful sounds; or using his unique ability at sprinkling social commentary in his work to spark dialogue and channel the human experience — one thing is for certain: CONTENT. RoQy TyRaiD is the embodiment of The Culture; golden era essence, with a contemporary edge.
Although first attacking the National Indie-Ground Scene in the with his acclaimed project The New Millennium Man, RoQ’y TyRaiD as we know him, was forged through years of grinding in the Southwest Region; selling thousands of cds hand to hand, building an understanding of the nature of a music grind whilst preparing to take his music National.
Flashfoward to 2017 and already, RoQy is an experienced emcee who has captured the slots of numerous “best up-and-coming indie artist” lists, including SiriusXM / Shade45’s mentioning for 2016.
In the last year, RoQy has spent the majority of his time on the road via tours and Festivals both in the US, Canada, UK, and Europe, in promotion of his recent album The Dichotomy of RoQy TyRaiD. HIs debut album was released by Soulspazm Records, home of such acts as DJ Premier, Marco Polo, Exile, Torae, and other industry heavy-hitters.
Currently, RoQy TyRaiD is working on his follow up album while preparing for another successful year. The future looks bright for the young Californian turned Phoenecian emcee.
Champion of the everyman. Universally relatable. He is YOUR perspective. The Culture Is Back.
** Catch him every Monday 8pm (MST) on The Clean Up Crew via RadioSupa.com