HAPPY FRIDAY to all members of the RoQ Riffs!!! We made it one whole week!! New segment time.  We all love food. You love food. Yes.. YES YOU DO!!! Don’t lie to yourself! You’re thinking about food right now.. I can smell it! Let me help you out with this new segment called Foodluminati … where we try out some pretty schweet eatin, shun. Major Corporate Food Chains .. need. not. apply.    Since it is Friday, I’m going to give you a mission for the weekend as if this were Doug and you were Smash Adams… minus the mildly-stalkerish obsession with that floozie of a classmate Patti Mayonnaise  ..  remember when she went out with Roger?? That little tanning bed lab rat of a tramp… smh.. YOU SHOULD HAVE DONE BETTER , DOUG!!!

Okay let me get back on subject. Doug did disappoint me , though… okay, I can’t help this , let me get it off my chest.  Bro,  Patti wasn’t about a damn thing, she played him that entire series. Skeet was probably Tony Gwinning that out of the park, anyways. 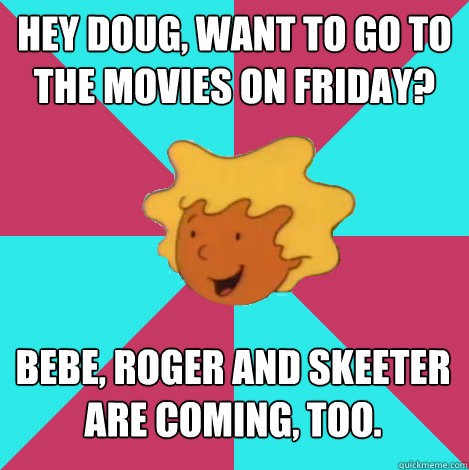 “How does food relate to underground / indie hiphop ” , you say?  It technically doesn’t I just wanted to post stuff about food.. and some struggle rapper probably references having “bundles the size of burritos” or some ignorant crap.. so we can say that qualifies this to be included on an underground hiphop site.  Okay so, lets do this.

THIS IS A REAL ALBUM COVER. THIS REALLY EXISTS.

You think I’m lying , don’t you.. okay, I’ll give you 10 seconds to go look then come back. We’re doing a segment, here…

I stumbled upon this culinary greatness otherwise known as Chino Bandidos earlier this year in my music HQ of Phoenix , AZ.  A few friends recommended it to me with no other description other than “try it”.  You know what, they did tell me what it was.  A cuisine-mix of Chinese-Mexican-Caribbean.  I was a little hesitant, I can’t even lie. Then I heard that weird japanese guy from inception talking and it kind of freaked me out..

I have a sudden urge to go to Six Flags Magic Mountain..

Or maybe I’m getting that deja vu-mixed up with a dream I had while knocked out from that delicious place of The Itis, I eventually consumed.

But then I took a bite of my friends jade chicken.  And fell out of my damn chair.

The tub is a metaphor for euphoria. The green portion of the plate.. that. Ya, give me your plate. Thank you.

Now, I’m on a mission: my next lunch WILL BE at this mythical “Chino Bandeos” or whateverthehell my friend told me it was called.  The spot is located right off the corner of 7th St and Greenway in North Phoenix.  So , this means I’ve been driving by this thing for HOW long without knowing?   I’m on it.  Head there, get out of my car in the parking lot and head towards the door.  Some hipster couple is speed walking trying to beat me to the door.. you know how that played that out..

I’m getting in that damn door FIRST.

…. SO I get in there..  look at the menu and how they devise it is like this…  you can pick one main by itself, you can pick a main and a side, or you can play two mains and a side.   Now, as I started above, this is an Asian-Mexican Fusion with a splash of Caribbean (and you’ll see why, momentarily). So a lot of these foods are prepared with elements of the other cuisine. 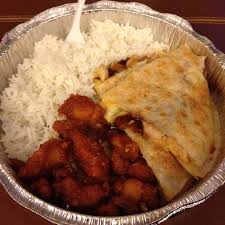 White rice, jade chicken.. and whateverthehell is in that quesadilla

Here is the chicken blown up for you non believers. 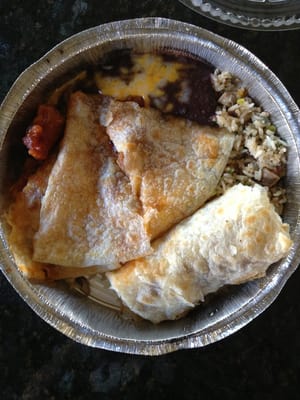 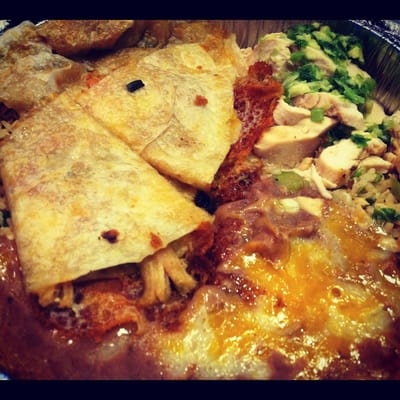 Emerald Chicken, Carnitas Quesadilla, Pork Fried Rice, Cuban Beans w/ Cheese.. Haven’t have pork since I could remember but.. this looks pretty damn good, I can’t even lie. Have some for me.

Damnit man.. I’m literally typing this while hungry , this isn’t helping me.. let me just break down the various dishes..

Grilled, skinless chicken that has been marinated with seasonings and some of the hottest peppers in the world. spicy peppers, but with no after-effects.  This is authentic Jerk… this is brotha-approved Jerk. LOL

Tender grilled, skinless chicken breast served with fresh ginger/green onion sauce. for the tenderfoot or the old master.  The only person who would appreciate a delicate little dish like this, other than me, is Patrick Batemen.

He gives killer reviews on music, too.

Grilled, skinless chicken breast basted with our own teriyaki sauce.  Once again, I approve of all of this known as Teriyaki Chicken.. do this. Do this asap.

Lightly coated, deep-fried chicken with garlic, onions, and red hot peppers.  If you are a Charles Hamilton-type guy and a little soft around the edges, this probably isn’t for you.

For the weary, they have fresh-and-ready-to-go sample trays so you can pick your bliss. Seriously.  It goes GREAT with their selection or rice & bean variants.. mix and match these with your dishes and you’re all set.

Spicy refried-style black beans made with olive oil.   I’ve gone this route a few times..  goes great with the jerked rice, below.

Chinese-style fried rice with green onions and seasonings.   Pretty much, “plain” is an understatement , at this point.

Chinese-style fried rice with chopped chicken breast, green onions and seasonings.    This is the fried rice upgraded with some damn good chicken.

THIS is what I was talking about …  “Chinese-style fried rice with chopped jerk chicken and green onions”.   The culinary gawds approve of this and everything else above this item.

BTW!!  You can also put all of this in either a quesadilla or burrito because.. ‘Merica…

Each meal comes  with a complimentary fresh-baked-daily, cinnamon-sugar cookie. Also sold by the dozen(s).. so there ya go.

… And apparently there is an “extreme” version of that said “snickerdoodle”, as well..

Chocolate-fudge version of snickerdoodle, sold every other weekend (saturdays and sundays).  I’m afraid of this damn thing, though.. it looks like it will give you “the sugar”.  Someone tell me how this is, though. I’ll believe every word you say lolol.

The environment is family friendly; spacious dining area for multiple parties. The TV is usually locked on some sort of sports channel or other crowd-pleasing entertainment , so bring your kids. Affordable prices, too. I’d recommend this for anything ranging from family sunday activities, to lunch, to pre-sports game food for the dinner table. 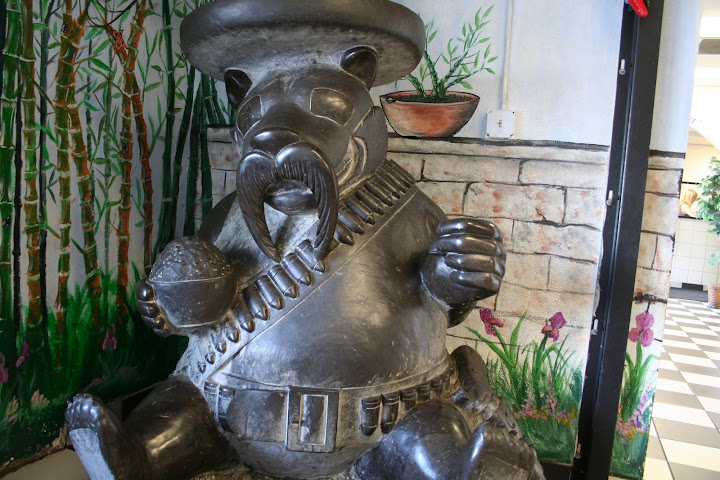 See? Kids love anthropomorphic animals. He even has a cool Danny Trejo mustache. That means this food is bad ass and is occasionally type cast in much the same was as Ving Rhames because Hollywood is racist. But that’s for another time, kids!

Okay..  there ya have it.. Foodluminati .. places I’d recommend to my closest music buddies when they visit the Phoenix HipHop scene… now you’re in the loop.  Keep the info to yourself or spread the word, all you’re doing is benefiting others with some bomb food.   For those in the Maricopa County region, you have a mission during the weekend, should you choose to accept it.

What are some other places you’ve been to that you would like to see me review??  If they are out of the region, you can write a review on it and I’ll post it in the upcoming message board section!

Alright yall, I’m out the gate..   until next time,

Stamp of Approval – Mr Miranda "Rising To The Top"

RoQ Riffs!! Yall good?!?!?! Maaaan, I”m not going to apologize for my little lapse in updating the website. I”m doing a lot over here… damnit.  ...