Don’t Be A Rap Nazi

So before I start, yes, The Dichotomy Tour is going by, successfully!! Thank you to everyone in attendance! Welcome to the RoQ Riffs!! Who’s ready for some controversy??

I’ve been wanting to talk about this subject for a minute. So, excuse me if it’s a little long-winded but somebody has to deliver the truth, Geoffrey from Fresh Prince-style. 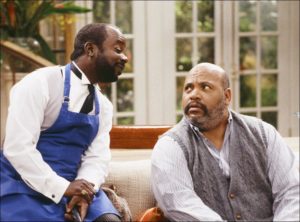 Although, if I wanted to specialize in fixing other peoples’ shit, I’d go back to working for Wells Fargo. Hey, Carol! Every time I was “sick”, I had a show. *thumbs up*

Alright.. loosen up your jansports ‘cuz here goes..
There is no such thing as “real hip hop”.

And no.. Hip Hop isn’t dead.. nor is said rapper here to “bring it back to life”, as the cliche goes..

First off.. folks usually mean RAP.. which is a form of expression and an element of the culture known as “Hip Hop”. With all forms of art, the interpretation is in the eye of the beholder, even if directly translated by said artist.  With that being stated, just because one, two, or the general consensus disapproves of a particular piece, it doesn’t take away from it’s creative identity.  Basquiat was painting stick figures and writing concise statements on walls in the eighties..  People thought Herc was desecrating records in the seventies.  Little Richard and Ray Charles were the devil in the eyes of many, in the fifties. 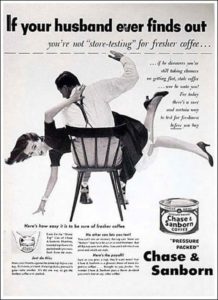 And yet, this was…? Fam… the hell… nothing says domestic disturbance like a fresh cup of Chase & Sanborn. o_o There is 0% “freak” in this picture, that headline is written as an ultimatum. “Make America Great Again”, my ass.. her ass.. someone’s ass.. ANYWAYS..

So, who are folks to say what “real music” is?  Seriously, who in the Sam Fuck has the authority to impose what is or isn’t an expression of art? Especially if they’re using a misnomer (“hip hop”) to begin with?
I get it, there is a set standard for quality that we, and especially I, abide by.  I use my standards to create the most digestible music that’s equally complex, possible. But to outright, socially oust artists or songs, for not meeting your personal criteria, is about the only thing “anti-hip hop” in this scenario.
This shit is universal:
Trap rap; backpack; R&B; “conscious“; “neo soul“; political rap; religious rap; freestyle battles; strip club rap; chopped & screwed; nerdcore; horror core; grime; gangsta; street; traditional; frat rap; break loops; beat tapes; turf talk; latinx; experimental; electronic; drum & bass ..look, I’m tired of links.. my back hurts.. Here, etc.. 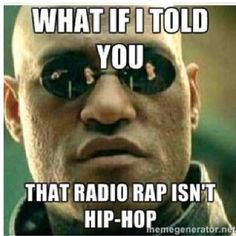 It’s AUDACIOUS for some underground heads to be so myopic and isolationist that they deem anything that doesn’t sound like boom bap to not be “real hip hop”.   I’m sorry, but I don’t think anyone wants to hear “Bag Lady” at the strippy, just like I wouldn’t want to hear “Smoke A Nigga” at the family barbecue.  Although, since there’s a grill there, that could work for multiple reasons.

This is why I can’t have kids. My son isn’t getting seconds for SHIT until he recites “What’s Beef” word for word. And don’t try out for track, either. The same rules apply for “New World Water”. Decipher or dehydrate, kid, pick one.

I think Desiigner is as wack as a LYRICIST as he is skilled in oxylinguistics.  But can he pump out a dope club record?? So..is he a hip-hop artist? (“Nooooo.” shut uuuup)  Some cats DESPISE Drake for ghostwriting, yet will give you ten-point analysis on why The Chronic / 2001 are classics. Which they are, but still..  Some of y’all will trash artists for rhyming about opulence, then turn around and bump Hov or Nas.. or DILLA, for that matter.  ( “we dem boys w the chains ’round our necks/ every 5 mins we untanglin’ them”)  Jay Electronica and Juicy J both reside under the same artistic tree, respectively. Although one raps about white girl, whereas the other is married to an insanely wealthy one.  I’m sure that sentence is going to be taken out of context, down the line because: personal luck and tactless wit.
I think this xenophobia is due in part to the the spirit of counter-culturalism that still looms in the background of underground hip hop, although by circumstance. The difference is, unlike the late 70s and 80s, when we rebelled against Americana as a whole, we’re rebelling against ourselves. People view the more “glamorous” side of hip-hop as unauthentic because it doesn’t echo the same “struggle” which resonates with the more grounded participants of the underground.    What some folks don’t understand is, the reason you have a lot of this gaudy music is for the same rebellious reasons. Hip Hop, as you know, came from the struggle.  99% of us didn’t come from backgrounds where it was normal to see Bentleys or huge knots of money.  And since financial distribution within the POC communities is horrifically low, what other way can some individuals express their by-the-grace-of-God, newfound wealth?
Ballin, makin it rain, copping engorged braids of gold jewelry, is a testament to beating the struggle, and an “eff you” to systemic oppression, which told us we were not allowed to rise above a specific economic class.  Sure some see it as a status symbol and could definitely diversify their Wu Bonds, but it all ultimately comes from the same cloth.
It feels as if some underground rappers  (and by “underground rappers”, I mean arrogant, rappity-rap local rappers who overly bitch about the 90’s) feed on the struggle, as they feel it’s a symbol of their own authenticity.  “I only do it for the love”.  Why wouldn’t you want to use what you love to fuel a more leisurely life for you and your family? Let’s get this straight.. I’m typing this up from a Starbucks in the middle of a tour.. and let me tell you.. being a broke start-up rapper SUCKS.   You laughed but I didn’t.. 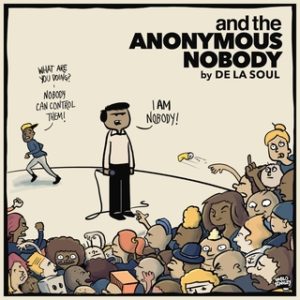 Btw, they also landed #1 on Billboard so..

By the way, that’s not to say that you’ll catch me Coolio’ing out all over Nickelodeon, or rapping in minivans like Busta Rhymes. (That’s some bullshit and you know it, Bus.. c’mon, dog) … but I’ll be damned if I’m not building my portfolio up to be as self-sustaining as possible.
With that said, whether you’re born into this culture black or afrolatino, or genuinely fell into it during your course of life, we all have different reasons to participate in the culture of hip hop.  Some do it for therapeutic expression, some do it as a career or are aspiring to do so,  some see it as a hobby, and some may only do it for the glory..  but we’re all active participants.
Balance is the way of the culture, everything must be given an equal platform, as this is a culture of the PEOPLE.  I know it may come as a surprise to some, given my approach to lyricism and hip hop music, as a whole, but I am a champion of the full scope of this culture.  My music is only a sliver of that pie.
In short, don’t be a rap/dj/graph/dance/fashion/book nazi.  Keep an open mind, you may find your perspective of music shifting, allowing you to appreciate your preferred sub-genre, even further.
Fuck Lil Dicky, though.. but Noisey already gave him the noose-and-chair, so we’ll leave that little appropriator alone.
Peace.
RoQy
“The Culture Is Back”

Stamp of Approval – Oddisee “The Goings On”