Folks believe there are only Four Elements in HipHop : DJing, Emceeing, Breakdancing, and Graffiti…  that is because institutions and specific curtain societies have long sought to destroy the phantom element, as it is the most powerful of the aforementioned “four” . Can you guess what it is?   Well, since there’s no way to play guessing games via text without butt-dialing the enter bar until you spend 45 seconds scrolling down, I’ll tell you…

Knowledge is THEE most important element in this culture.. doesn’t matter if it’s top 40 or indie hiphop , world famous or underground.  Knowledge is the cornerstone of creativity and the very fabric of societal growth.  So with this segment, aptly titled The 5th Element , we explore things I think are pertinent to society — because hiphop is universal, as taught by the Universal Zulu Nation.

Let’s step way from the topic of underground / indie hiphop for this segment..  in fact…this is VERY much “hiphop” .. the community is the literal lifeblood of “hiphop”..   with that said…

The inaugural issue of The 5th Element features this bullshit that has been going on in Ferguson, MO , following the senseless killing of a black teenager by the name of Michael Brown. He joins the list of black males recently slain over the most minor of infractions;  “infraction” , in cases such as Trayvon Martin, being a euphemism for “being black in a bigot’s neighborhood”.  What did Michael Brown do? He allegedly stole a $4.00 pack of cigars and “disobeyed pedestrian traffic laws” …for that he met a brutal end.  No, you don’t understand.. he was shot 8-10 damn times in the face and chest area OVER A PACK OF SWISHERS.  This is after the officer, who’s name has been withheld by the Chief of Police and Prosecutor, is stated to have already physically harassed and assaulted Michael along with his 22-year old friend Dorian Johnson…

There is no way this is unintentional. You could argue a case over an accidental discharge. You can attempt to defend decision at firing at someone who flinched or motioned for what you were SURE was a weapon which he would use to cause harm. Stand over a man and let out several shots? How is this unintentional? Even if there was a “suspect-initiated” physical altercation, if he surrendered.. why feel the need to shoot this man multiple times?? I don’t even need to bulletpoint the list of events that took place that unfortunate and fateful day, I’ll let Mr Johnson recap. Until official documentation can be presented from the corrupted Ferguson Police Department, I will personally chose to believe this account over anything.  Watch:

Discarded like trash or road kill.  This was a living, breathing, young man with goals and dreams and a unique story just like YOU. He lived through the sequenced events that we call “life” only to get up to this point and die —  first day of college just days away. He had a bright future, America. So what, “he stole a pack of allegedly stole a pack of cigars and j-walked”. How many of you have gotten away with multiple DUIs or used illegal substances? Statistics say an overwhelming amount of us are not so honest when it comes down to tax time. For a less-than-petty theft and a teenage rebellious attitude towards pedestrian traffic laws, he was harassed, assaulted, then executed.

As stated earlier, this is just another unfortunate case in a string of very .. similar.  events   (third link is NSFW).

So, of course people from the local community are going to come out and assess the situation for themselves. Of course, emotions are going to be at their peak.

Between those aforementioned pictures and a few others I’m about to post.. let me insert this link here, about the police department allegedly preemptively calling for “crowd control” before even cleaning up the scene and starting some sort of crime scene investigation.  This quote and information are curtesy of  http://www.cnet.com/news/anonymous-hacks-into-ferguson-police-site-for-dispatch-tapes/

” #Anonymous has obtained audio files of police dispatch and EMS during the #MikeBrown shooting,” Anonymous boasted from its @TheAnonMessage Twitter account. According to the dispatch tapes released by Anonymous, the police allegedly requested assistance for crowd control before mentioning any shooting or calling in for emergency medical services. The dispatcher in the tapes also mentions the department got information about the shooting from the news, rather than police on the ground. “

Now.. with that said.. the perfectly peaceful protests turn to this.. with the police purposely ramping up tensions by arriving in full on riot gear, in an already racially fueled scenario. This is almost a time warp to the days of “Birmingham” .. right in America’s back yard..

Now… we know, without even having to spend the manpower pulling up various cases of police instigation and cases of infiltration within protests in order to incite riots so the paramil… i mean police.. no.. wait.. yes, PARAMILITARY FORCES can , for lack of better words and in the spirit of American Genocidal Foreign Policies..  shut. shit. down.

I mean, how else can we go from above…

To this..  actual sniper units??

Disappointed in our society and law enforcement as I continue to watch this unfold #FergusonShooting #FergusonRiot pic.twitter.com/V6xZxxIKfQ

So, OF COURSE , at that point , all hell is going to break loose and people are going to emotionally snap.. as is the case with ANY protest that’s eventually infiltrated and corrupted past it’s collective breaking point..

Of course people are going to literally fight back…

When a literal paramilitary force is going for the overkill with “less than lethal” munitions such as these: 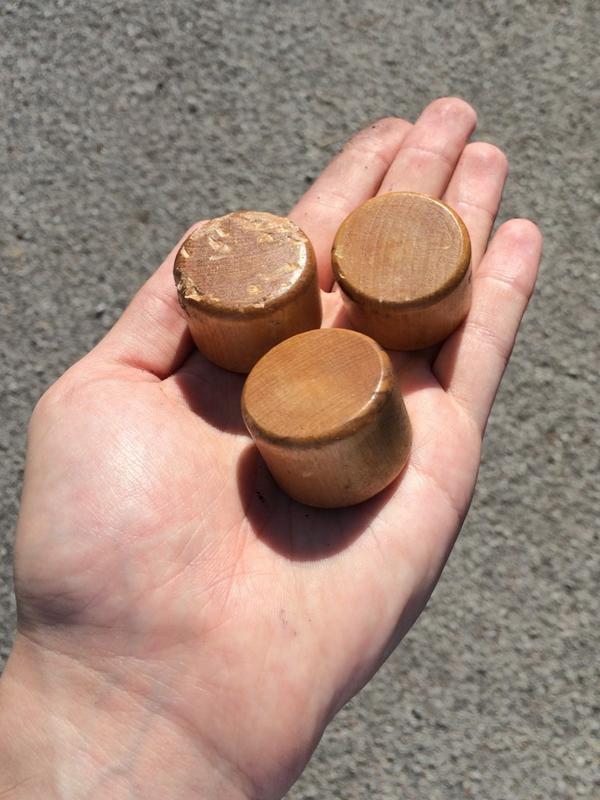 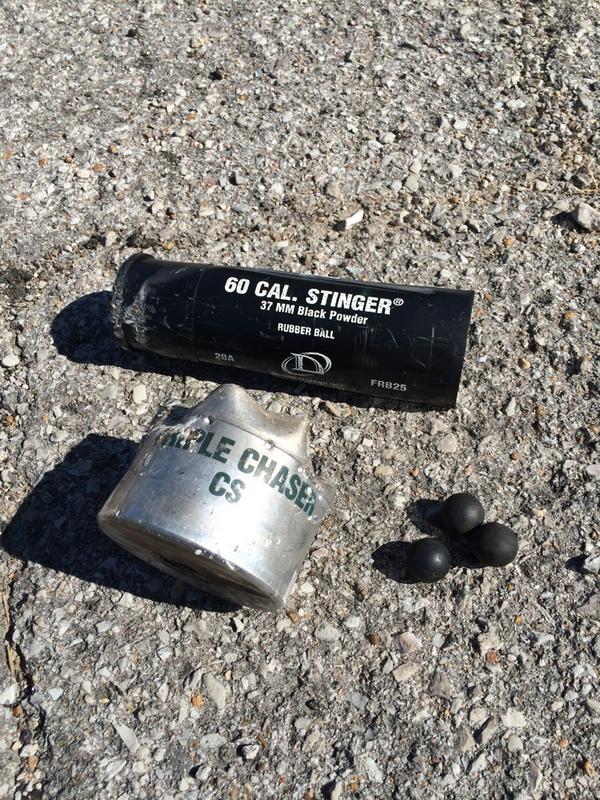 Btw…   *those were NOT pepper ball rifles, earlier..

I truly believe these recent egregious and horrific cases of police brutality are meant to create the level of civil unrest needed to institute martial law or some sort of “regulated freedom” , in which we live in a virtual police state. There are all sorts of government contingencies and programs in place to help strengthen their benefactors offensive on our society. Right now though, people are finally starting to get sick and tired of seeing unarmed victim after unarmed victim  brutally murdered with no sort of justice or real resolve.  The protest was about this killer cop being brought to justice; which is not about “revenge” but “harmony” . Without true justice in society, there is no harmony in society. Give us justice and , inadvertantedly, the closure we need to go back to our day-to-day lives. I wholeheartedly believe this is another case of government coercion, in the case of peaceful protest gone wrong.  All signs point toward it..  there would not be literal paramilitary forces on the streets in tanks this soon…   All you have to do is watch a couple live feeds to get the inside scoop. No doctored videos, no scripted events, no TelePrompter .. just a municipality smothering it’s fed up citizens. Residents are being tear gassed in their own damn yards. Seriously. Tell me what “threat” could you pose from your porch..?

Broadcast live streaming video on Ustream
“But wh-wh-wh-wh-wait, it gets worse”

The media conglomerates will spin it around , though. Just like Katrina.. they will concentrate on reports of looting. They will purposely misinterpret/exaggerate angry protesters’ chants in order to feed the stereotype that blacks are uncivilized “savages”.  It seems Americans know better, now.  Collectively, we are waking up.. “late pass” or not.

Why did we have to get to this point in order for this to become an international event.. for it to become fresh ink on the pages of American History? Why do young black males like Oscar, Trayvon, Michael, Sean, Eric, and now Ezell have to be made into martyrs in order for the spotlight to be shed on the thousands of other black males who have either been senselessly killed in unsolved police brutality cases… or falsely imprisoned for decades??

3 Stacks  said it best without uttering a word:

The difficult subject is how to properly convey and articulate anger regarding race relations, while being mindful of certain organizations / clandestine bodies that  not only want people of darker pigmentation under subjugation, but EVERYONE who is not within their fiscal percentage bracket.  The myopic cannot or refuse to discern is only the first step.. totalitarianism has to start somewhere, right? The silver-lining here is more people are aware of police brutality to the point where individuals of different demographics are aligning in solidarity and pushing for the progression of humanity as a whole… this is just the ENTRANCE to the rabbit hole that contains their outlook and plans for day-to-day citizens of this planet.   As long as we are collectively aware, WE are the ones in power. Just can’t be afraid of being ostracized.. of going without. Hand-in-hand.. strength in numbers.

As of the  Summer of 2014, Ferguson , Missouri is the focal point for The Great American Humanitarian Issue.

What are your thoughts on not only these events , but previous similar cases of police brutality ? Do you think it’s connected to a larger agenda? Even if you have completely different opinions on these matters or anything related, we’d all like to know… so comment below.

Considering the subject matter, I’m going to insist that everyone respects the next individual’s opinion, down below..