The Dichotomy of RoQy TyRaiD – !!MY ALBUM!! IS AVAILABLE!! 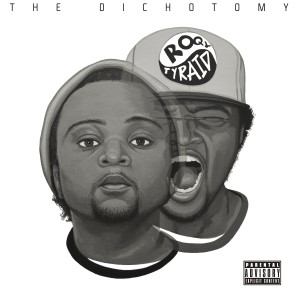 Things have been on the up and up, lately. A3C was the start of a whole new season for your favorite introverted emcee. So, basically, I’m going to deliver this to you straight-and-forward..

The Dichotomy of RoQy TyRaiD is available!

That is right.. and you can go to your favorite digital store and cop it right-the-hell-now. Itunes, Amazon, Xbox Music, Google Play, man basically whatever digital store you use.

In fact, let me make this easy for you..  here you go.

Want to order the physical album?? SURE.. HERE!!!!

The album is something else, though. I really wanted to deliver something which represented my perspective of self and the world. The duality of the world and every shade and nuance of it inspired me to put voice to beat. Introspective analysis, cerebral songs, odes to my tenure in the workforce, action songs, upbeat records, mantras of determination, failed romance, cruising music, combative anthems, eloquent arrogance, and even a damn song about being in an antiquated elevator . Everyday life inside and outside the mind of RoQy TyRaiD.

Producers such as Slopfunkdust, Jimmy Flight, Arza, Oddisee, M Slago, Illmaestro, Hezekiah, Nameless, and the I.E.’s very own Nabeyin (CA ALL DAY) grace this album, providing me the metaphorical Gundam to my Heero Yuy.

Here is another dope aspect of it..  it’s out via the respected establishment Soulspazm Records. Which would mean that I am no longer a free agent!  They have gone above and beyond to give this album the love and rocket boosters needed to land in the ears, hearts, and minds of hip-hop heads across the globe.. just in time for the Holidays.  So, for me, christmas definitely came early, this year.

Digital Release is today ( November 6th, 2015) .  You can head over to the merch page to order your physical copy.

So.. there you have it!!  The album is here.  Give it a listen and let everyone know what you think.   Shout out to everyone who has pushed this out. Also, thank you to everyone who pre-ordered the album on iTunes. And ANOTHER HUGE THANK YOU to everyone who jumped behind the initial Kickstarter for the project. Respect to you all.

Oh, another shout out to the good brothers over at MyClickUrban who have been behind this project even before the Kickstarter.

Alright RoQ Riffs..  I have a show tonight with Akrobatik out in SLC.. about to hit this plane and make something happen!

Live from Phoenix (until take off)