The Significance of Jay Dee

A lot of people say “J Dilla Changed My Life” ; I look at the incomparable body of work Jay Dee is responsible for, how each era of his sound resonated with that particular period in my life from child to adulthood.. and I realize his music helped guide it, as opposed to changing something already in existence. Glad to have possessed the insatiable curiosity to thumb through the credits of albums, to go on Napster binges in the early-early-early 2000’s the first time I DL’ed a “Jay Dee Remix”..

First beat I ever rapped to people over was “Players”. Jay Dee’s influence saved me from crippling depression and self defeat. Inspired me in the morning as I picked my hair in the mirror on my

✊? to “Thelonious”, before heading to high school. His catalog is what I played after a successful evening. After washing the RoQmobile and feeling fly as shit. I dedicated songs. I mouthed “fuck the po-lice” to officers. Popped my chains when he rapped about lavish shit. Spiritually travelled when he provided the backdrop for thought provoking music. Mimicked Busta’s mannerisms during their incredible collaborative efforts. Laughed about sitting in the turning lane with a shorty, one of the first times I played “Baby”. Bus’ “Show Me What You Got” in my headphones when I got lost on The Strip at 14. “Stakes Is High” on the back of the city bus thinking about how intimidating the music biz must be, as a kid in 02 (yes “late pass”, Im from the west tho) . Yelling Dillas lyrics on Reunion with pride like I’m not CA as hell (the “rep more D” line, obviously).

The gravity behind one man’s dedication to music is without comparison. It is the dominant body of mass, when mentioned among other trailblazers. Ya, these other cats are REVOLUTIONARY , artistically… but how many would use every ounce of their dying energy to create constellations??

I’ve been in many bad places in life. But when it comes close to affecting my music, I think of the brotha on the wheelchair holding a mic and I keep on going. I’ll never quit, because of this person I never met.

For my comic nerds, this is The Age of Apocalypse .. The Professor isn’t here.. creatively, we’re in a world of shit. But as long as we buckle down and push forward, creating a new normalcy, we’ll do right by those who inspired us to dream and define our lives by our inner selves.

Peace to The Goat .

And while some wouldn’t find this picture the most flattering, I personally view it as a testament to incomparable will and love for art. This is what a warrior is.. not flashy street shit.. not bravado laden faux political records.. this is what Champion Sound is.. 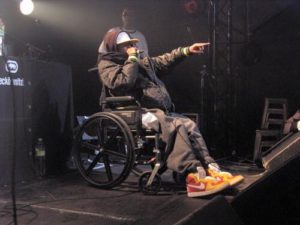 Happy BirthMONTH to The GOAT.

Hey Hey-Hey-Hey!! What’s going on RoQ Riffs?? Back with another episode of RoQyPiece Theater  . This episode, you and I are going to check out the ...