RoQ Riffs!! Yall good?!?!? Hope the day has treated you well! So, I’m doing another show in the AZ area.. and I’m a bit excited .. can’t even lie to you. This one is going to take place in the city of Glendale, AZ.. part of Phoenix ‘s dope Underground HipHop scene. Special guest DJ will be with me, can’t even let you know who it is.. you’ll just have to either show up if you’re in the area, or see the youtube after!!

Well.. I can answer three of those three questions:

Now, SO Lounge has a pretty heavy rep in the Indie scene out here in Phoenix for killing shows in monumental ways.

Did I mention my dude ELJAYBEATS of The LO Classics is going to be providing the tunes.. ??   As an avid reader of my site ( lol )  .. you’re already familiar with the talented brotha.

I’m honored to have some cool openers, as well..  BrandonLee …. STAT  … and STREETS

and of course..  OHM from AOTA is hosting…   so, from front to back, the show is covered!  Heads are expected to be in attendance, so come out and enjoy the music with us. Depending on how packed and live it gets, I may even premier a new song for yall. Who knows!!!

S/O to the good sir, Nacho for organizing this event around what I do creatively. That is beyond dope.

I haven’t done this in a while… who knows??  Pack the club up and we may have too much fun. LOL

( Speaking of which, Derrick Reed (DIR: Spicy Fud) and I are working on something ILL for you all .. can’t ruin the surprise yet. )

Alright, folks. Always good delivering the monologue to your screens.

Alright RoQ Riffs, until next time.  “THE CULTURE IS BACK!!” 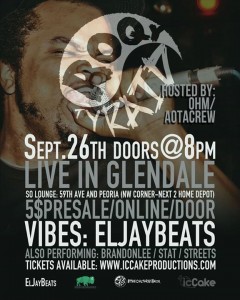 This is a segment I called  Front & Center  , where I… or whoever is hacking my computer and diligently working on my behalf, showcase a random ...