What’s going on good people?! Ya’ll good??  Okay.. so, I know this trip begins a couple days from now but it would be remiss for me not to bring this to your attention, especially the good people who reside in UK/Euro. But, yeah… this shit right here?! 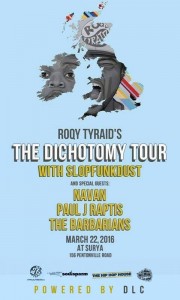 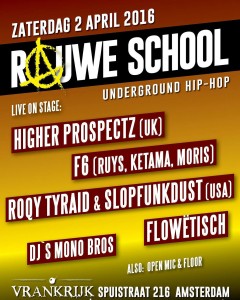 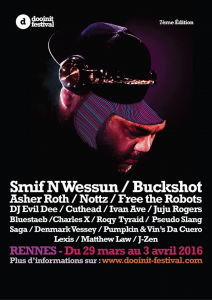 (Germany, Paris, Rife-Scotland [March 24th] , Manchester dates in various states of “TBD”. So, hold on to your hats for additional information.)

So, I’m clearly headed out to Europe for a few shows.  Highly excited, as this is my first opportunity to perform out in another continent, as well as go to another continent, in general.  It’s a bucketlist as an emcee given all the incredible things I’ve heard about the various subcultures of hip hop in Europe. From the concert footage, to the videos, to the artwork, I’m excited to see all of this in person.

So, myself as well as Slopfunkdust are starting things off at Club Surya on Tuesday, March 22nd.  From there, it’s off to the races; pop up shows, music, and other “major” events such as   Amsterdam at Vrankrijk on April 1st.   And… annd

The Dooinit Festival in Rennes, France on April 2nd!

First trip, first festival.  Some pretty dope names on that line-up, too.   Tickets for that are available  HERE.

Basically, this is the calm before the storm. Get your coats bitches, winter is coming.

RoQ Riffs!!!! Yall Good?! Okay, you may need to sit up and pay attention to this one because it’s pretty damn serious. A couple months ...