RoQ Riffs!! Ya’ll Good??  Let’s just speak candidly , here..   This week has been one of the most tumultuous seven-day spans we have experienced in quite some time; from Nepal, to Baltimore, to Boko Haram. These huge, simultaneous events all seem to collectively “test” humanity’s resolve, empathy, apathy,  and belief system.   Thousands dead, tens of more displaced, kidnappings, quasi-martial law, destroyed homes.. almost eerily, coincidentally, and poetically culminating with a violent volcanic eruption, displacing just under an estimated ten-thousand Chilean residents.  Ironically, this is being posted on “Mayday”..

If we were to snapshot this week, this brief moment in modern human history, how would we caption the picture?

Nepal suffered truly crippling and horrific 7.8 magnitude earthquake, rivaling their most destructive one of nearly a century prior. Thousands of declared deceased.. at this time.. over FIVE THOUSAND PEOPLE.  Homes absolutely destroyed. Foundations irreparably cracked. Emergency response trickling in but not at high enough rate to have any real effort, thus far. In fact, according to Prime Minster Shushil Koirala, the expected toll is expected to surpass  ten… ten thousand people.. there are respectable towns smaller than this expected number.

The scary thing about this, is the sheer magnitude of destruction. Everywhere from major established communities such as Kathmandu, to rural areas, to even communities within reach of Mt Everest — where avalanches have caused an as-of-yet undetermined amount of casualties.  As international relief starts to trickle in, they face a logistical nightmare, as tens of thousands of victims are now living in the open streets and in crowded tents. Projections for disease running rampant due to these unsanitary conditions are , themselves, horrific. Sewer lines cracked , water supplies contaminated, morgues beyond capacity..

” In some villages, [around] ninety-percent of homes have collapsed. They are just flattened. ” – Am. Physician Rebecca McAteer

“[Further north] The reports are very disturbing. Up to Seventy-five percent of the buildings may have collaped. ” – World Vision aid Matt Darvas. 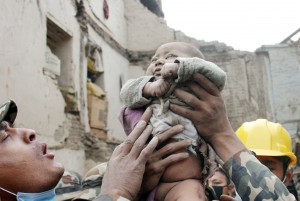 From the tragedy is the miraculous; a baby was rescued over TWENTY hours after the event. Incredible, right?

Overcrowded hospitals running out of operational fuel. A U.N. estimation of over eight million of the twenty-eight million people now literally picking up the pieces of their shattered lives. What in the hell could be done to expedite the recovery process?  With folks searching for loved ones, neighbors, colleagues with candles in their hands.. how does one expect to maintain hope amidst such disparity?? Between the destroyed homes, the cracked homes precariously perched over the makeshift tents their tenants now reside in… and the looming aftershocks, which are typically only slightly weaker than the initial earthquake…  what in the hell can be done? 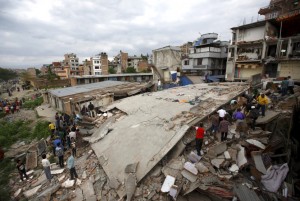 Citizens gathered near a collapsed house after the major earthquake in Kathmandu, Nepal April 25, 2015. REUTERS/Navesh Chitrakar

Lest not forget the impending monsoon season, as mountainsides  and hills are now destabilized.  Not just that, but buildings risk collapse due to liquefaction.  While the initial impact was, indeed severe… it seems that, unfortunately, the true “tough times” still lay ahead.

For the altruists who would love to donate, while I would love to recommend a specific charity, I believe you doing the research and picking what works best for you.  Just make sure it lists Nepal, and make sure to check for the blue Better Business Bureau stamp. According to my personal research, sending random goods / clothing, is not recommended.  Normally, the general rule of the internet is “people are lazy”.. and given that, I should provide you a link.. but those who are willing to donate, don’t need to be guided with an easily clickable link.